It was hard not to notice it, a bulky shell of a building, the exterior seemingly completed except for the gaping holes where the windows were supposed to be. It sat next to the Bnai Zion library, right on the bus route we take all the time to go to and from Jerusalem. So from the very beginning of our stay here, we passed it, and, after a while, we got used to seeing it, and it became another part of the local landscape.

Once you’ve been here in The Land a while, you get used to the slow, snail-like way most construction projects get worked on. Some are forever in the planning stage (the Tel Aviv light rail, which was first proposed during the Golda Meir days and was only begun several months ago), while others get started but are never finished. Most maddening are the projects that do get finished, but take     f-o-r-e-v-e-r and then some. As you might expect, a lot of the projects here combine two or even all three of these eventualities.

It was maybe four years ago when the announcement was made that Bnai Zion (an American foundation, the good folks who have paid for a lot of cultural venues all over Israel – including our library, which has books in five languages, as well as the “seed money” for one of our local parks) was going to fund a music conservatory, to be built on an empty area behind the library and next to the empty building in question.

My obvious question at the time was, will they use the shell of this seemingly abandoned building (whose original purpose I do not know)? That would make sense, right? It wasn’t clear from the original description, but, yes, thankfully in the end, it became obvious that the old structure would be incorporated seamlessly into the new beautiful structure.

Construction began, and we could see that there was a crew working every day. But we could also observe that they were proceeding at the glacial speed that is the standard here. Finally, in February 2014, we could see a sign – in two languages – that the George W. Schaeffer Music Conservatory would be open for business in July 2014. For real? I for one hoped it would happen, but over the years, I have developed a healthy sense of skepticism about Israel time projections. Needless to say, the summer of 2014 came and went, the work crews came and went, and the #174 buses that we take came and went past the site, and still the conservatory was not open for business.

But there was hope. As long as we could see a piece of machinery on the work site or a random construction guy mucking about, we knew the project was still a go, and therefore the building would get finished one day. And then there it was, the new part of the building that would house the music school, ready for business! We could see kids going in with their instruments, and through the large glass windows, we could see cellos stacked against a wall. Progress!

And yes, the concert hall, a/k/a the George and Irina Schaeffer Cultural Center, was finally, finally finished, and there was an opening ceremony and a performance of Fiddler on the Roof, which I’m told was well done.

A few weeks later, someone posted on our local Anglo-Facebook page a flyer about a concert by our local youth orchestra to take place in our new concert hall. And now we need a little background information.

All the while the crew of workmen were digging and drilling and building, numbers of our local youth were learning how to move a bow across a violin, blow into a trumpet or clarinet, or resolutely bang on a drum set – as part of the extensive music program here in Ma’ale Adumim, and I’m sure that many of them were giving recitals in our local community center – all under the radar of most of us. But now they had the wherewithal to do it up right.

The concert here was in essence a dress rehearsal, for the orchestra had bigger fish to fry. They had performed in an international competition in Bratislava and had been awarded third prize, with the opportunity to perform – are you ready? – at Carnegie Hall in NYC. We should have ordered tickets for the local concert right away, but we just never got around to it. Fortunately for us, a friend called a day or two before the schedule concert with an offer of extra tickets at the going rate, 30NIS for two. Good thing, because the concert was sold out. Lots of family, friends, music lovers, and the just plain curious. 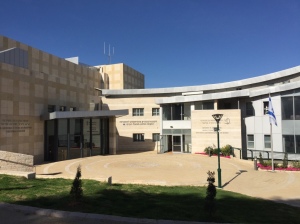 If nothing else, I too wanted to see the interior of this George and Irina Schaeffer Cultural Center, which had taken ever so long to finish. Barbara and I arrived with only a few minutes to spare. We met our friend and walked into the beautiful, spacious lobby. The auditorium was filled, and so we walked up to the balcony, which had an additional 200 or more seats. Even that was filling up rapidly. Finally, the orchestra members walked on stage, sat down, and got ready to perform. Someone came on stage and made an announcement. An opportunity to thank the Bnai Zion foundation. As is standard protocol in orchestral performances, the conductor, Benjamin Shapira – the head of the music school – would only then come on stage, take a bow, and then and start the concert.

The only words in English on the programs we scrounged up were Star Spangled Banner, which followed by HaTikva, was to open the program. The orchestra began, dum dedum dum dum dum, at which point Barbara and I got up and stood more or less at attention, glancing around to notice that, while a few people here and a few people there were also on their feet, most of the audience was still sitting. They only got up when HaTikva was played. I could attribute this lack of manners to the gaps in the Israeli educational system, but, sad to say, there were Americans in the audience who, for reasons best known to them, remained seated during the American national anthem.

Because I went to a proper public school in The Bronx, I learned that, not only do you stand for The Star Spangled Banner, but you stand for any national anthem played in an official capacity simply out of R-E-S-P-E-C-T. I was discussing this matter with our dinner guests last Friday night, and he, an émigré from the F.S.U., resolutely maintained that he would not stand for the Russian national anthem, but that would seem to be the exception that proves the rule. I feel confident that the crowd who attended the concert in New York last Sunday stood for the Star Spangled Banner and remained upright during HaTikva. At least I hope so.

The crowd sat down after HaTikva, and the concert began for real, giving me a chance to look at who these young musicians were and how they were doing. According to the program, the orchestra has forty-nine musicians, and while they all qualify as “youth,” some of them looked as if they were eight years old, and others looked like they were on-leave from the army! What they had in common was that they were all good – or so it sounded. (Shall I mention here that the acoustics in this hall are excellent?) OK, the strings didn’t have the silky sound of the Philadelphia Orchestra under the late Eugene Ormandy, but, hey, it’s a youth orchestra! They played a credible selection of “standards” by Michael Glinka, Sibelius, Grieg, Johann Strauss, and Dvorak – in short, a full length concert – and they played with suitable technique and genuine emotion.

What was going through my head as I listened to this young talent bowing and blowing? My monopoly would be broken. I had every reason to believe that, until the following Sunday, I was the only resident of this community of 40,000 souls who had ever performed at Carnegie Hall (in the Spring of 1958, as a member of the NYC All-City High School Chorus, which together with its sister orchestra gave an annual concert). Well, I’m gracious; I’ll willingly share the honor with others who are now the same age more or less as I was back then. I haven’t heard any reports back, but I KNOW they did themselves proud, as well as their community, nestled on the edge of the midbar, a little bit east of Jerusalem.

The concert ended to a rousing ovation, and everyone headed out into the lobby, where we found and greeted a whole bunch of our Anglo friends. Now we had time to look around and realize that there was a full service restaurant with a bar in this lobby.

The whole place reeked of class! And this beautiful concert hall – to be used for many, many performances in the months and years to come – was built using that old, unfinished shell of a building that had sat there looking drab and unimpressive these many years. Not too shabby now.

2 thoughts on “Not Too Shabby Now”