It’s not just the coffee.  Readers who have been paying attention over the years will be aware that I’m usually at the Mahane Yehuda shuk Thursday mornings and that I always begin my excursion with a stop at Power Coffeeworks. Those few minutes may turn out to be one of the highlights of my week. You see, it’s not just the coffee; it’s the conversation. There are establishments where you go in alone, you eat and drink alone, you leave alone, and you feel alone. Not so my favorite spot.  There, while you’re indulging in your favorite caffeinated brew, you’re free to start a conversation or to join in on someone else’s, and, suddenly, you’re no longer alone! A few of my favorite chats over the last few months:

Eitan, a pretty-much-out-of-the-box young guy who comes and goes, was working the morning shift. Brandon, the proprietor, was on his way out, leaving Eitan with a list of instructions, including dealing with four plastic tubs of freshly ground coffee. Eitan looked at the tubs, neatly stacked, and considered his options. (The two of us were the only ones at the counter.) He thought for a moment as to how he would proceed, then said to me that he might as well begin at the beginning. Sometimes the mixture of coffee and soy milk will bring out the philosopher in me. I responded that the trick is always to know where or what is ‘the beginning.’ For example, I asked him, if someone were to ask you how you came to be standing behind that counter, serving up the full panoply of caffeinated beverages on offer at Powers, which is thousands of miles from where you were born and partly raised, where would you begin your story? With my prompting, he went back and back in time, until he came to something that happened when he was ten, when his mother let him lick the frothed milk from the coffee she was drinking. And that started him off on a life as a coffee fiend.

I remembered this conversation a bit later as I was working my way through the shuk, and I keep thinking about the question because it is important, isn’t it? How does one begin at the beginning – not before and not after? It isn’t just a point of concern for those of us who write; everyone, at some time, has a story to tell and possibly the need to tell it. As an example:

We’re at a dinner party (think Shabbat table), and we have the opportunity to relate something that we think is useful, edifying, or just simply funny. And there we are, three minutes into our story, just when we’re about to get to the important part –the reason we’re telling the story – when someone else at the table realizes that we’ve mentioned a person he knows or a place where she has been, and that becomes the topic, until someone else has something else to say and, what with someone else interrupting to ask for the peas and carrots at the other end of the table, we never get to finish OUR story. What’s worse, nobody else seems to notice or care because the point is not to actually finish anything (except the food), but to keep the chatter going throughout the meal.

It’s a cruel world. If we don’t get to the point lickety-split, someone will snatch it from us and start running in a different direction. On the other hand, if we begin our narrative in medias res, no one will know what we’re talking about. Maybe by the fifth time we tell a story, we get it right – so we don’t lose anybody in the telling or have our little saga stolen from us. Which is what we want, isn’t it?

And then there was a more recent stop-over for our seasonal favorite, cold brew with a healthy dose of soy milk. Brandon was there, and we started to talk about the state of kashrut in his establishment. No, not was the coffee kosher that he roasts himself from the finest green beans he can find (that’s a no-brainer), but who was going to provide him with the piece of paper to that effect? Power Coffeeworks was burglarized twice recently; the last time, two of his state-of-the-art coffee grinders were taken in the dead of night. Lesser folks than Brandon and Stephanie would have packed it in, but the two of them are not lesser folks. They organized a Crowdfunding campaign that raised enough funds to improve their security, which we all hope will deter the sneak thieves who made off with his machines in the dead of night. However, as Brandon reminded me, to make a go of it, they need to maintain a healthy wholesale business, selling their roasted beans to hotels, restaurants, and the like. That’s why he needs the RIGHT piece of paper, because if he has the WRONG piece of paper, his wholesale customers – especially in the Jerusalem area – are afraid to buy from him. (Not that the RIGHT piece of paper implies a higher standard of kashrut. Far from it; it’s really an unofficial license to operate.)  That’s why his previous piece of paper is no longer on the wall, and there may be a new piece of paper soon. As I said, a lesser man would have given up the roast long ago. 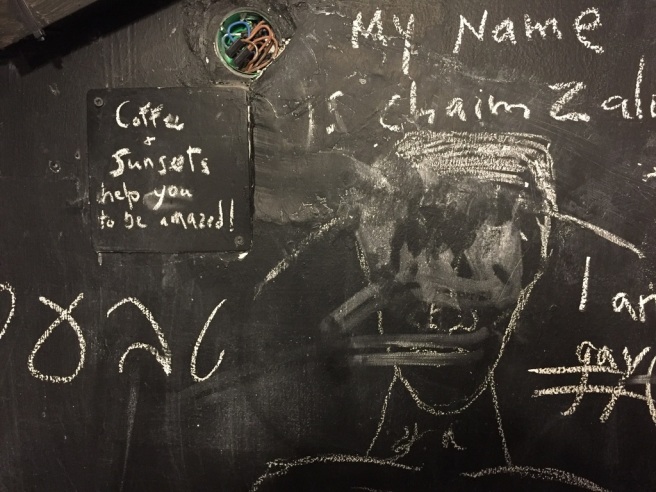 Time for my cold brew. I sidled up to the counter and sat down on a stool next to a young man. (I know exactly how old he is because, in the middle of the conversation that followed, another guy joined in, assuming that he and I are of the same generation. I shot him down pretty quick. Sir, I was born before Pearl Harbor. Whereupon the youngster chimed in, I was born the same year as the movie!)

There’s always music playing at Power Coffeeworks, invariably American, usually some mix of pop, rock, jazz, folk, and blues, all culled from YouTube.  When I sat down, Frank Sinatra was on-stage, performing a few pop standards. Then, suddenly, there was this reedy voice, In olden days a glimpse of stocking was looked on as something shocking…. Of course. That’s a recording that Cole Porter made of his own song back in the 1930’s. My new friend opined that he was a big fan of Sinatra, but the next guy, not so much.

Let me explain, I said. That’s Cole Porter singing. To which he (the young man, that is) responded, Who’s Cole Porter?, causing my hand to tremble and spill a few precious drops of Cold Brew on the counter.

And so, we began a serious conversation about American popular music – then and now. But first we had to clear up a misconception that was at the heart of the matter. When I began explaining the distinction between the men (and a few women) who wrote the lyrics and the music to the great standards of the past and the musicians who performed and recorded them, and that one shouldn’t judge a Porter song by his own rendition, my young friend hit me with the following astounding question: Didn’t Sinatra write his own songs????????

Actually, no! None of what you’ve been listening to from Sinatra was written by him. In fact, the last song you heard, Blue Moon, was by Rodgers and Hart. (I was not going to be foolish enough to ask him if he knew who this song-writing team was. And I won’t even ask YOU. Rodgers and Hammerstein, maybe.)

And then we were off and running, discussing American popular music then and now: what happened at the time when everyone first had a radio and a phonograph, the improvement in recording technology in 1926, the why’s and wherefores of the ‘Golden Age’ of songwriting and its slow death after W.W. II, even delving into to the versifying of Lorenz Hart, Ira Gershwin, and Emily Dickenson.

Anytime I’m discussing anything as subjective as taste in music, I need to explain that it’s not MY taste or YOUR taste that matters but the collective taste of a lot of people over a period of time. Plus that same period of time has a way of acting as a filter, so that only the best of the best seems to remain in the collective memory of those who care. And after the fact, some bright person will come along and explain why everyone was ‘right’ to like A instead of B.

While I was busy extolling MY music, my young friend was more than prepared to stick up for HIS music, the music of his generation – at least what he likes – which he is certain is some of the greatest. But, as he readily admitted, what he likes is not what is most popular with most of his peers. But, in the end, THAT is my point: there are uncommon moments, when what is the best in music, art, literature is among the most popular, and what is popular is also what is best. (You are all free to think of your own examples.) Those examples seem to be what is most beloved, what is most remembered long after.

It wasn’t as if I had all day to continue this discussion; I was supposed to be on my way to the shuk. But how could I leave in the middle of such a fruitful conversation with a total stranger? The wine could wait; the herring could wait; the cheese could wait; the vendors would be in their shops and their stalls in another half an hour. What is more precious and more fleeting than a good conversation, one that no one is going to hijack?

There’s plenty of coffee in and around the shuk, some of it decent, some not so. Perhaps someday, the best – available only at Power Coffeeworks – will also be the most popular. May the froth be with you!