As with any trip you take or any endeavor you engage in (not trying to sound too morbid, but…), one day you start and before you know it it’s all over. We were told to leave our duffel bags (easier than suitcases to cram into a limited space) outside our rooms at the crack of dawn, and the staff would bring them to the reception area to be loaded into the Land Cruisers. The staff at the Oldeani Mountain Lodge gave us a final round of ‘jambo, jambo,’ and that was it, we were off for our final day in Tanzania.

I have to admit that, at some point, I lost track of all the different parks, conservation areas, and game preserves we visited; they all merged into one big biological blur. But, because of the sign warning about the baboons,

I know that our next to last scheduled stop was at the Lake Manyara National Park, where we spent the morning. On the road again, and then serendipity!

As I understand it, Yigal (as usual, in one of the other vehicles) had asked that, if we should happen to pass by a Maasai market on the roadside, could we stop. Of course, we could. It seems that these markets take place once or twice a month, unlike the always-open shuk we had stopped at several days before. So yes, serendipity. We happened to be there on the right day. Our three vehicles pulled off the road. CAN I GET OUT???!!! Well, everybody else was getting out, so I jumped down and wandered about.

As you can see, bananas and plastic shoes are in demand. 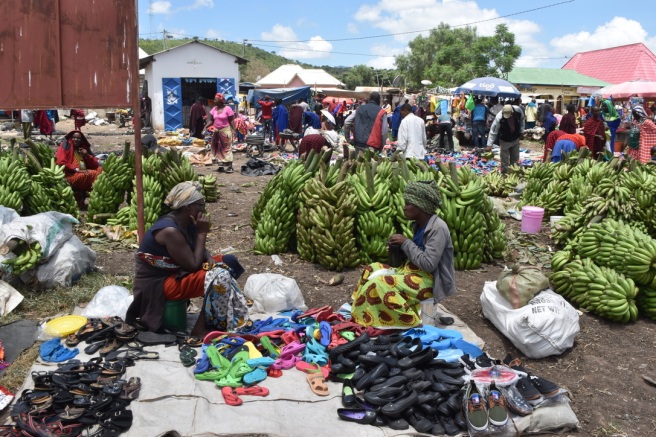 But so are fruits and vegetables. 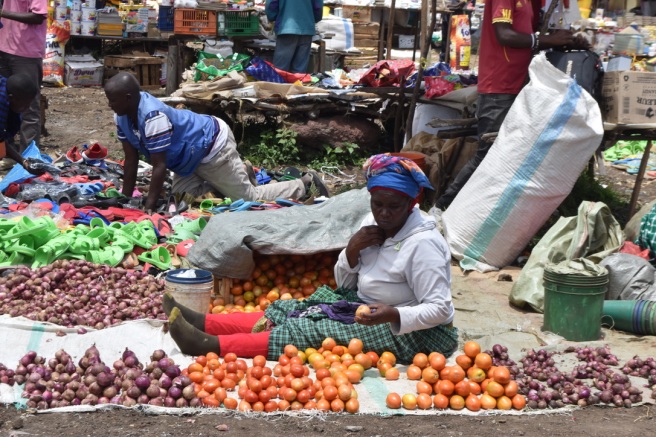 I think you can get a sense of the size of this market.

I could have stayed there a lot longer, but that’s me. When I’m in a photographer’s paradise, I don’t want to leave. We did have one more stop to make before arriving at the airport, the Culture Heritage Center in Arusha. As our helpful brochure described it, “The center houses unique collections of local artwork, including carvings, paintings, handicrafts, metal work and precious stones. Attached to the center are shops showcasing and selling the artwork and decorative items which can be purchased as souvenirs.” Most important, there were tables we could sit at and eat our boxed lunches – and order another cup of coffee! Barbara and I wandered through the art gallery, up and down the winding ramp à la the Guggenheim Museum in NYC. The shops here were the one place where we could use our credit cards, so at the last minute, Barbara ran into one of the shops and bought this little carving as a souvenir. Jambo, jambo. 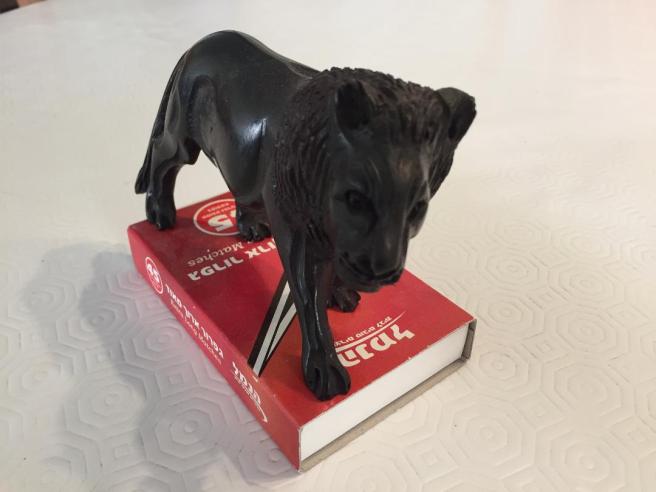 There are airports in which you don’t mind hanging out for a few hours until your flight takes off. And then there are others…… The Kilimanjaro airport definitely qualifies as one of the others, bare-bones to an extreme. Maybe if there were more traffic going in and out there would be a reason to upgrade the amenities. At least there’s no problem finding a place to sit, even if there’s not a cup of coffee to be found. For that, we’d have to wait until we arrived at the Kigali airport in Rwanda. Having spent a six hours layover there nine days before, I was well acquainted with every nook and cranny of the waiting area, including what was on the shelves at Duty-Free.  Which kind of Rwandan coffee beans was I going to bring back with me? Decisions, decisions…

It’s over a month since we’ve been back, a month since the medical personnel at the African airports were naively asking if we had been to China recently? (Hey, it’s more than they did at Ben-Gurion, which boggles the mind.) That’s one good thing about traveling to faraway places with strange sounding names, you have memories.

Memories of being in the middle of the ‘endless plains’ called the Serengeti, which, as I mentioned before, is bigger than the country in which I now reside. Spending days traveling around, bumpety-bump, in Moudi’s Land Cruiser, looking at exotic birds and beasts. Sitting for hours in airports that are hardly worth remembering. Especially now, when getting on a bus and traveling into Jerusalem to Power Coffeeworks and our Mahane Yehuda shuk is beyond the pale. When the ‘wildlife’ around us are the crows and the street cats.

I have memories, and I have photographs. I’ve shared a few images that fit into my narrative, but there are many more. Here’s a glimpse of where we were and what we saw.